Bristol BRC researcher Dr Helen Bould is working with the Born in Bradford (BiB) cohort study to gain a better understanding of eating disorders among adolescents. She’s found that almost a quarter of pupils surveyed at three schools in Bradford are experiencing issues with eating and body image.

BiB Age of Wonder is a seven-year project looking at Bradford’s adolescents as they transition into adulthood. It is part of the BiB research study, which has been tracking the health and wellbeing of over 13,000 Bradford children since birth. Researchers are now working in partnership with secondary schools and young people to capture their experiences of growing up in the city.

Consistent information about how eating disorders and disordered eating affect the public has been lacking. This is especially true when it comes to socioeconomically and ethnically diverse populations. Questions about eating disorders aren’t always included in population surveys, as other areas of mental health have historically taken precedence.

Dr Bould is investigating eating disorders and would like to find out how common they are among the socioeconomically and ethnically diverse population of adolescents in Bradford. Together with Dr Francesca Solmi, a colleague from University College London, she advocated that Age of Wonder include a short questionnaire consisting of 12 questions about eating habits and body image. With support from Prof Simon Gilbody and the Born in Bradford Healthy Mind Apprentices, this has been included in the general mental health questionnaires handed out to adolescents in three schools piloting the new Age of Wonder questionnaires.

So far, the study team has analysed pilot results for 749 pupils. Researchers were surprised when they found that a relatively large number of young people had scored highly on the questionnaire. Just over 24% of pupils reported experiencing difficulties around eating and body image at a level that might be expected in a clinical population. Despite their surprise, the study team believes this result shows eating disorder research should be expanded to address the clear needs of communities.

Over the next year the entire Age of Wonder cohort will be asked to complete questionnaires that, amongst other things, ask them about their eating and body image. The study team will analyse this wealth of information to better understand whether factors within the school environment are likely to impact how young people eat and how they feel about their bodies.

Researchers will then design interventions aimed at preventing some of the issues they identify. They will test these interventions in a certain number of schools and compare the results from these schools to others, where no interventions have taken place. The study team hopes that this will let them assess how effective these interventions could be and whether they should be implemented on a larger scale.

“The pilot results from this study have shown us how common disordered eating could potentially be among the young people of Bradford.

“As a clinician I’m interested in treatment, but problems of this scale also require prevention – we need to understand what we can do in schools to prevent children and adolescents from developing eating disorders.

“This study will raise the profile of eating disorders and allow us to do more work in this area. It will help us build research infrastructure and assess prevention methods.”

Listen to Dr Bould talk about her research here: 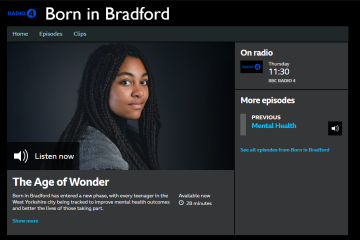 Born in Bradford: The Age of Wonder

Listen to the programme